The images of the Maidan Revolution of 2014-2015 have made a deep impression in the world, the photos of the dramatic sceneries, especially the night views went all over the world. Especially the images of the thousands of people and the Ukrainian flag rising up from the crowd are deeply imprinted into the collective memory. While the images of burning barricades show the humanitarian drama that unfolded on Maidan square and its immediate environment. It is the intention of the design team to capture these iconic images in a monument that represents in a combination of abstraction and literal representation the concepts of democracy, open society and enlightened citizenship.

The design team has chosen to take the flag as the virtual carrier of the geometry of the Maidan monument. An imaginary volume of a waving flag is populated with exactly hundreds points, each of them representing one of the hundred heroes. The lasting impression of the image of Ukrainian people holding the flag in a joint effort is translated into the dynamic wave shape of the constellation of the hundred nodes. The nodes form a spatial three-dimensional network, therewith representing the mutual connectivity and the robust collaboration between the heroic people, whether they belong to the heavenly hundred or to the thousands of their fellow protesters. The constellation of nodes resemble a collective brain, with its brain cells and synapses, operating in sync as to get things done. 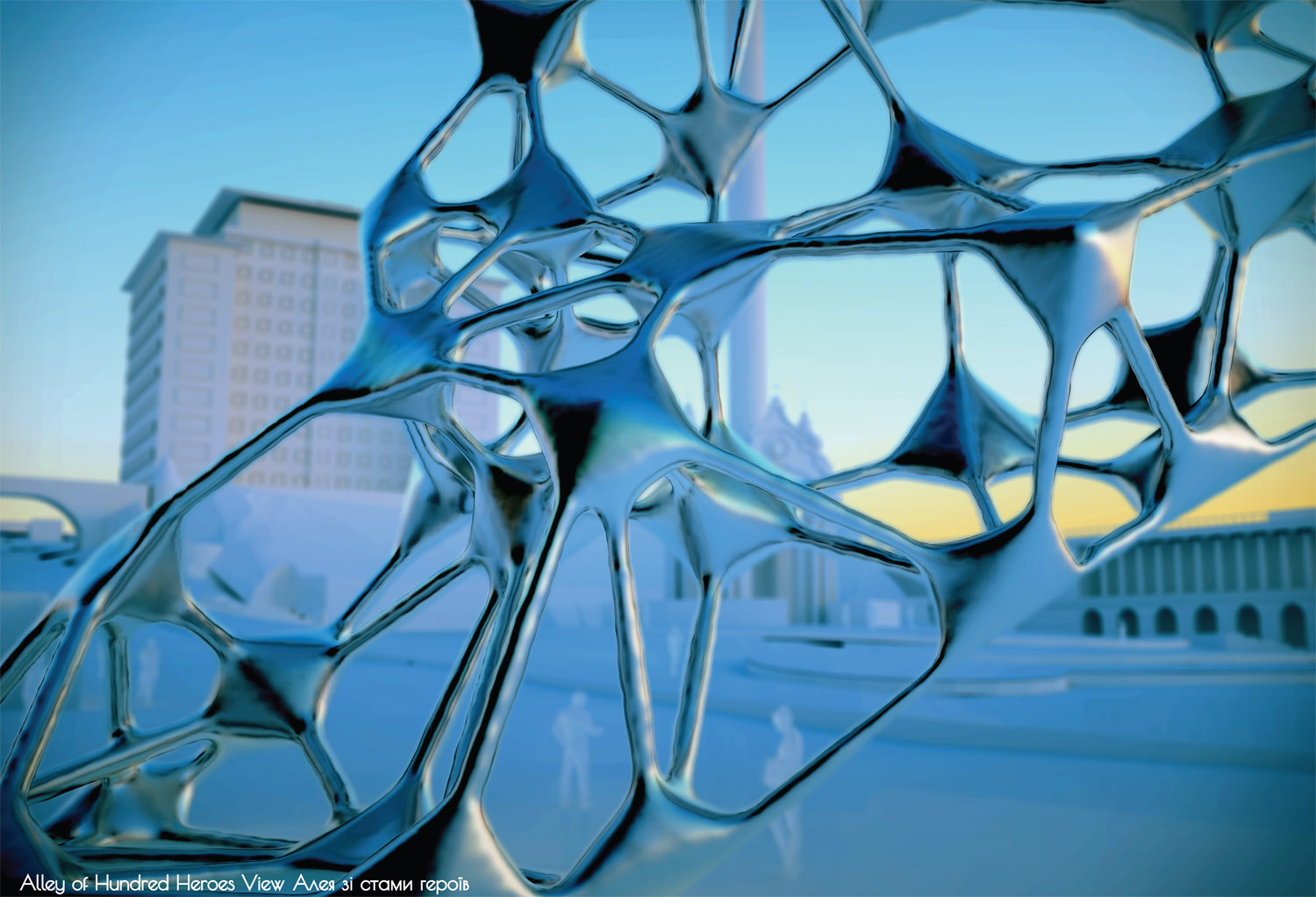 The proposed Maidan Monument is both robust and transparent. Walking downhill one sees through the mazes of the network the contours of the Maidan. The structure gains strength when it reaches the ground, for structural reasons since at the lower part bigger forces are at work, but also for symbolic reasons since the stronger arms [the edges] and the most determined minds [the nodes] bear the revolution. The triangulated three-dimensional network forms a structurally robust configuration. The spatial triangulation symbolizes the strength and robustness of the Maidan revolutionary network. If one node or one connection fails the others take over without the structure to collapse.

From the ground up the Maidan monument becomes more and more ephemeral, lighter, more transparent, as to symbolize the transition of the hundred heavenly heroes from their earthbound life to their eternal life in the minds of the Ukrainian people. The lightness of the otherwise robust structure is enhanced by its materialization. The polished stainless steel structure reflects its environment, at the lower levels it reflects the people on the ground, at the higher levels the sky and the clouds, at certain weather conditions it almost dissolves in the local context, despite its explicit presence. The upper parts seemingly merge with the skies as to map heaven back onto the heroes.

At night, the programming of the lights takes over the experience in daylight. A subtle program will be designed as to recall various instances of the intensity of the revolutionary Maidan movement. From the ground up an orange-red flickering animated fire will be mapped on the thousands of LED’s spread over the nodes and the edges. The animation will seem to set the Maidan monument in fire. On other occasions, most likely in the winter season, the mapping will be as cold as ice, reminding the public of the harsh winter conditions, which the Maidan protesters had to endure. Burning fire and icy cold were the essential ingredients of the revolutionary movement and are mirrored back into the collective conscience via the dynamic programming of the LED’s.

The stainless steel structure evoking the image of the flag waving in the wind, leaves ample space for pedestrians and emergency vehicles to pass under on their way uphill or downhill. The position of the 20m high Maidan monument in the very beginning of the Alley of the Heavenly Hundred Heroes is at the heart of the historic action. It’s almost non-monumental placement at the side of the street is intentional as to emphasize the self-evidence and responsible normality of the collective action of the Maidan Revolution. The monument for the Heavenly Hundred Heroes stands among their people, decidedly not on a pedestal.

The chosen position of the Maidan Monument allows for the gathering of thousands of people, exactly on the spot where the thousands enacted their spontaneous collective protest inside the barricades. During ceremonies the exact center of action of the Maidan Revolution may be revived, gathering around the Heavenly Hundred Heroes monument. Standing close to the monument the public will feel like being merged into the heroic network of the hundred nodes, it will convey a lasting spatial memory to the gathered public, a strong communicative message of the need for such robust networks as to shape their future.

On special ceremonial occasions the programming of the LED lights will evoke the Ukrainian flag, yellow colors in lower regions, blue colors in the higher regions.